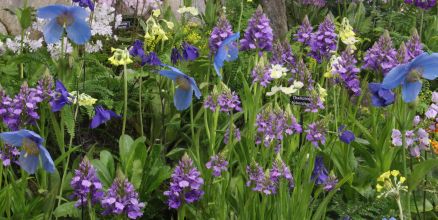 We have mounted large displays of alpine, bog and woodland plants at many major shows. At Gardening Scotland we have won gold medals every year so far (premier gold since the higher-level award was introduced in 2012), and also the Alf Evans prize for the best display of alpine plants. In 2006, 2007, 2008, 2009 and 2013 we were judged to have the best floral display in the show. In 2010 we set out to do something completely different, and won the award for the most innovative display.

In 2012 we were awarded a silver gilt medal at Malvern Spring Gardening Show.

Chelsea Flower Show 2015
We thank Premier Wealth Management for support for our display at Chelsea.

Chelsea Flower Show 2014
We are very grateful for support for our display at Chelsea from Investec and Premier Wealth Management.