For the first time we decided to have a display at a big flower show away from our home base in Edinburgh.

The plan was a have a rocky outcrop that would be viewed from one side (plus the ends), but we were allocated an island space. Would it be possible to build the rocks up to eye level and above and back down again, in a total width of just 2.4 metres? Yes - but it was tricky. The ton of rock was assembled on site and covered with flowers in not much over one day.

The judges seemed to be happy. We were given a 'Premier Award' (the equivalent of a large gold medal), and the Brotherton Trophy for the second-best floral display in the whole show - how can you compete with carnivorous plants? 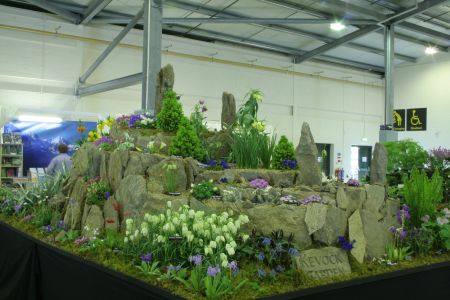 Here is a view up to the highest point, one of our tall 'monoliths'. There is a mass of white Fritillaria meleagris in the near corner, with contrasting dark Trillium chloropetalum giganteum beside it. 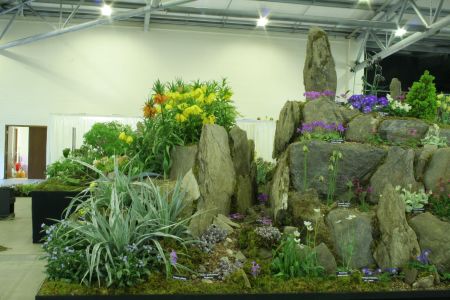 Moving further round a gorge is revealed, with Androsace sempervivoides 'Susan Joan' and a Pleione within it, while beyond the gorge are Fritillaria imperialis high up, with Astelia chathamica 'Silver Spear' below. 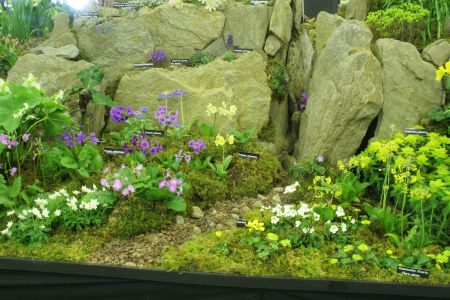 At the opposite site of the gorge there is a bay with many primulas, and other plants liking cool, damp conditions. 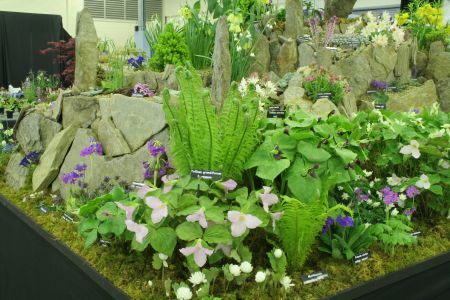 Finally we reach a corner dominated by large clumps of trilliums, with the pink Trillium grandiflorum roseum and red and white forms of Trillium erectum amongst others.