Building for the Future of Nepal

In the Autumn of 2011 we (Catherine Erskine of Cambo and Stella and David Rankin of Kevock Garden) went trekking in Nepal. We saw how plants grow in the surprisingly different conditions that exist, against the magnificent backdrop of the high Himalaya.

We also learned of the extreme difficulties that the people of this poor country experience, and of their heart-warming commitment to their country. The three people who accompanied us on our expedition all had major needs, and we wanted to help them. We could just do this ourselves, but we decided to involve other people, to increase understanding of this country and its people, with their great potential. 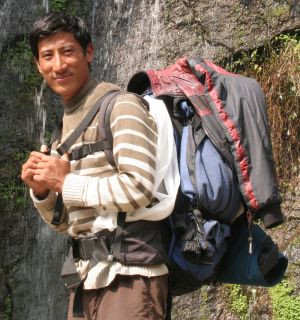 Our first priority was to help Purphu Singi, one of our porters. During the monsoon, which had been of exceptional severity, his mountain home had been completely destroyed by a landslide. There was no insurance and his only option to raise the money to rebuild his house would have been a loan at 5% per month. All his income was needed to pay rent for a couple of rooms for his family. He had stone from the house and some unbroken bits of wood, but he had to get permission, at a price, to fell a single forest tree, from which every piece of wood had to be sawn by hand. Everything else had to be carried up thousands of feet from the valley below. He could do the work, but he was trapped; he could never get the capital he needed to build the most basic of homes. 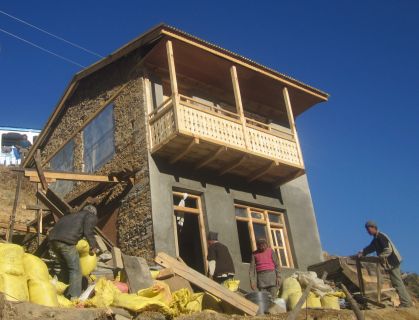 With your help, his house has been built. The amount needed was tiny by our standards, just over Ł4000, and we increased this so that he could add a toilet room - what we would regard as the most basic essential. With his wife and two children he is now living there. Thank you! 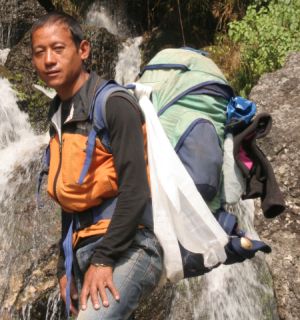 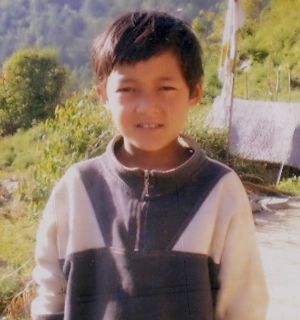 Our second porter was Nurpu Singi. He has four children, and the second was desperate to go to secondary school and was seeking a sponsor. We were immensely impressed by the quality of school education, and the commitment to it shown by both the pupils and their parents, who generally had no opportunities themselves. There is no school in their mountain village, so Suresh would need to board in Kathmandu. This involves a total commitment of about Ł1000 a year for six years. We met several young people who have benefitted from such sponsorship and were impressed by their commitment to the future development of Nepal.
So we have made a commitment to Nurpu and Suresh. Suresh is now in this third year at secondary school, and one way or another we have guaranteed that he will be supported to the end. So this project will be running for several years yet - until the end of 2017. 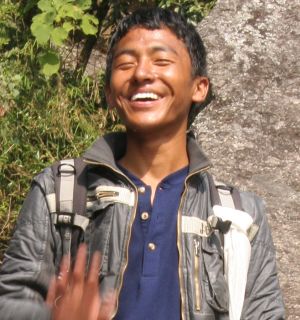 Finally, Chhabi Thapa was our botanical guide. He is a masters student, who funded the first year of his course by working for five years as a teacher. He acknowledges the huge support of his parents, poor rice farmers, who provided him with all his earlier stages of education. He needed funding for the second half of his course - a total of about Ł2500. He is a great character with many talents, who will be an asset to his country. He is completely committed to putting back into his country what has been given to him.
So we have provided what he needs, and is now completing his studies. He has completed all his course work, passed his exams, and has writen his thesis. A little bit of revision is needed, and then it will be complete.


In none of these three cases do we want simply to give money. What we have proposed is that the money given is regarded as an indefinite interest-free loan. If and when they are in a position to repay some or all of the loan, nothing should come back to us. Instead, they should support some other person who is in a worse situation than themselves - with the same conditions. Chaabi expects to be able to start this as soon as he gets a job after qualifying. Meanwhile, he is acting as a mentor to Suresh, so he is already learning to help his own people.

We are not setting up a big charity; this is a specific project to help three people. Can you help? Everything given will be passed on to them. We have set up a bank account under the name 'Building for the Future of Nepal'. We will continue to provide reports on the projects from time to time, and full accounts are available.

When you place an order for plants, either mailing an order form or through our on-line store, you can include a contribution to 'Building for the Future of Nepal'. There is 'plant' in the catalogue with code XKP-Ł1, which you will find under X (for Xtra!) So, for example, if you want to give Ł12, order 12 of these 'plants', as well as your plants. Make it clear that this extra payment is for the Nepal project. Or, of course, you can send a cheque.